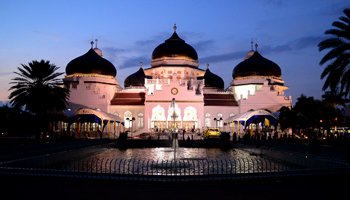 The Grand Mosque of Baiturrahman, located in the city of Banda Aceh, Nanggroe Aceh Darussalam province of Indonesia, is one of the historic buildings that still survive to this day. The mosque was built by Sultan Iskandar Muda Mahkota Alam in 1022 H or 1612 AD during the Sultanate of Aceh.

At the time of the Sultanate of Aceh Darussalam, besides the Grand Mosque in the holy city of Makkah, Baiturrahman Grand Mosque is also one of the learning centers of Islam by people from all over the world.

As a historic place of high artistic value, the Baiturrahman Grand Mosque has become a religious object because it is one of the most beautiful mosques in Indonesia with stunning architecture, interesting carvings, and a spacious courtyard with a Turkish-Ottoman style water fountain. Architecturally, the building of Baiturrahman Grand Mosque embraces Moghul style (India).